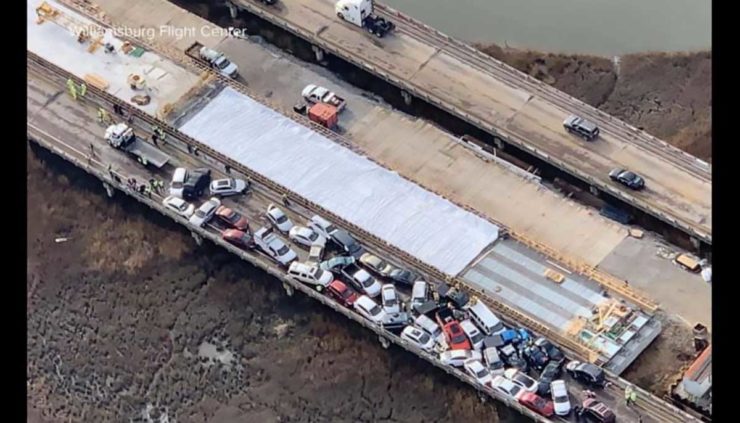 A massive 69-car pileup Sunday morning blocked all westbound traffic on Interstate 64 in Virginia, just in time for the rush of holiday travel.

Drivers were enveloped in a thick fog as they drove over a bridge near James River in Williamsburg. The icy conditions and poor visibility led to a catastrophic “chain-reaction” accident.

The low temperatures from a cold air front met with the moisture and humidity of the nearby James River over the weekend, causing a thick fog to envelop a stretch of I-64.

This fog concealed the matching icy roadway, which was coated in moisture from the river and then frozen by plummeting temperatures. As drivers entered the foggy region, their sudden braking caused them to lose control of their vehicles and slide into other drivers.

Those drivers, in turn, would be propelled forward like dominoes falling in a row, crashing into other cars ahead of them.

This cycle would repeat whenever a new car drove into the foggy region of the bridge, saw the growing pileup, and slammed on their brakes. They would then impact the growing ball of vehicles, sending out further chain reactions and hitting other cars in front of the mess.

Thankfully, no one was killed during the harrowing chain-reaction pileup. Emergency responders on the scene noted that the accident was so tightly packed that they had to climb over crashed vehicles to get to trapped motorists.

Cars were packed in so tightly between the guard rails that there was no room to open car doors or maneuver at all.

As rescue crews worked to get trapped drivers and passengers out of their vehicles, they had to send fifty-one people to the hospital for their injuries.

In total, eleven of the injuries were considered to be serious, and two were “life-threatening.” Emergency responders worked rapidly to get these injured passengers to hospitals.

Ironically, traffic also stopped on the eastbound side of the interstate, as rubbernecking resulted in further crashes. According to weather reports, visibility was less than a quarter of a mile due to the thick fog cover.