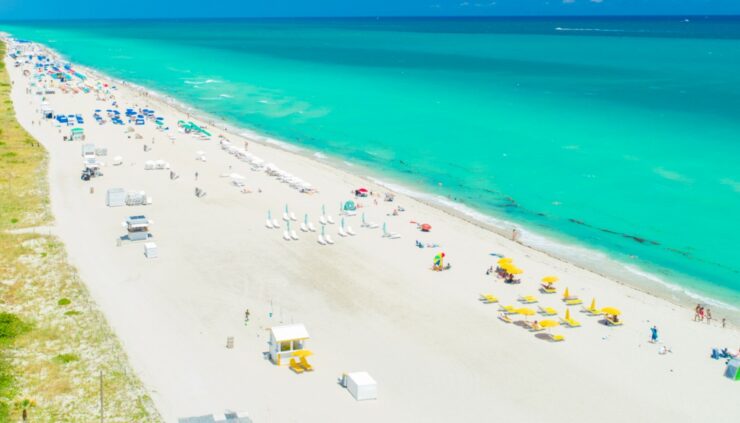 The Party is Not Over: Florida Isn’t Closing Beaches Amid Coronavirus

Mixed messages are being sent to spring-breakers in Florida amid the coronavirus of whether or not the state is going to close the beaches, after the Florida governor said “the party is over,” but not so fast – here is exactly what was said. The TL;DR: The beaches are still open with restrictions and the party is still on!

Make sure you’re wearing the best anti-wrinkle cream today ladies, and all you spring breakers, because record heat is in store for Florida and a hot weekend is ahead throughout the state.

The party is back on, just in smaller groups and a little more spread out. The state is not closing the beaches, so your fun in the sun will continue.

Miami seems to be the coolest spot, forecast to reach 80.

Is the spring break party really over in Florida?

With the entire nation being asked by the federal government to hunker down until March 31, avoiding gatherings of ten or more people, and practicing social distancing of at least 6 feet to avoid contact with other people – most of America is shocked by the videos they are seeing of crowded beaches in Florida occupied by spring-breakers who believe they are invincible to coronavirus.

New reports emerged yesterday that young people are susceptible to coronavirus, with 20% of severe hospitalized cases being those between the ages of 20-44, only slightly lower than the larger age group which is running at 26%.

Former Florida Governor and current Senator Rick Scott (R) has voiced his belief that the beaches should be shut down entirely.

Governor appears to say he was closing the beaches

By now, you’ve probably already seen the video of an interview with the young spring-breaker in Miami, Brady Sluder, who told Reuters: “If I get corona, I get corona. At the end of the day, I’m not going to let it stop me from partying.”

Allegedly, Florida Gov. Ron DeSantis (R.) saw the video too, and it prompted him to announce on Fox & Friends on Thursday that “the party is over in Florida.”

“The message I think for spring breakers is the party is over in Florida,” DeSantis said during the Fox interview. “You’re not going to be able to congregate on any beach in the state. Many of the hot spots that people like to go to, whether it’s Miami Beach, Fort Lauderdale, and Clearwater Beach are closed entirely for the time being.”

Governor did not close the beaches, still open in Florida

In the statement he made on Fox & Friends, DeSantis seemed to indicate that all the beaches in the state are being closed. But note that he said “you’re not going to be able to congregate on any beach.”

DeSantis later clarified his intentions in a press conference later on Thursday.

“We did an order, no gatherings on beaches, 10 or more,” DeSantis said. “So what you’ve seen now is a lot of the sheriffs‘ departments have instituted protocols. I had the Brevard sheriff, he had his deputies on ATVs. They had a boat going down the coast and they’re telling people you’ve got to disburse.”

“And so I think that’s a more prudent approach, to do social distancing. I just spoke to the U.S. surgeon general about it. Here’s the thing,” DeSantis continued.

“They want you to social distance, of course. But they actually encourage people to get fresh air. They just don’t want you congregating in big groups.”

“And so if you have a Floridian that goes and walks their dog, like a married couple on the beach, as long as you’re not within six feet of each other, they view that as a healthy thing,” DeSantis added.

Update: Miami Beaches CLOSED, The Rest of Florida? Not So Much

As of 9 AM Thursday, the Miami-Date Mayor Carlos Gimenez made a decision that all Miami-Dade area beaches would be completely closed. This includes the popular South Beach area that is a magnet for tourists.

While this will not stop party-goers from moving the party to another stretch of beaches, it will hopefully discourage continued large groups and partying.