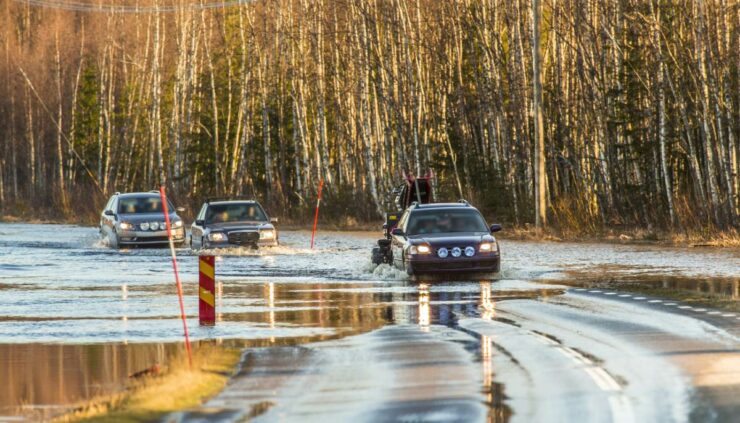 Hurricane Sally made landfall as a destructive Category 2 on Wednesday near Gulf Shores, Alabama, but the biggest danger is its crawling 3 mph pace which could cause catastrophic flooding for miles, and for days.

Hoping to convey the seriousness of the threat Hurricane Sally poses to the southern US, The National Weather Service (NWS) warned via a tweet: “This is a LIFE-THREATENING SITUATION. SEEK HIGHER GROUND NOW!”

Around 4:45 AM CT, Hurricane Sally made landfall as a Category 2 storm with sustained winds of 105 mph and higher gusts, near the border of Alabama and the Florida Panhandle, close to Gulf Shores, Alabama.

The biggest threat over the next few days will be that of flooding, because as the NWS tweeted, “nothing is going to go away anytime soon.”

The NWS has declared a flash flood emergency and warned the storm was a “severe threat to human life & catastrophic damage from a flash flood.”

Due to the excruciatingly slow pace of Hurricane Sally, which is averaging 3 mph, the storm is going to hover over the area for a lengthy period of time.

Lingering storm will bring heavy rainfall and flooding for days

As the storm lingers with heavy, sustained rainfall, flooding will be the result. Some areas had already received 15 inches of rain by early Wednesday morning and could accumulate up to 35 inches by the time the storm finally passes out of a particular area, CNN reported.

As the storm moves east over the next few days, forecasters are predicting that central Alabama, followed by central Georgia, may see somewhere between 4 to 12 inches of rain and say significant flash flooding is possible. Later in the week, portions of the Carolinas could also receive rainfall amounts between 4 to 9 inches.

Some roadways may be impassable

Police in both states have reported that the fierce winds have already created damage and that the amount of hazardous debris has “become too numerous to list,” urging drivers to stay off the roads, CNN reported.

The NWS is warning people in Alabama and Florida to “hunker down” and that “nothing is going to go away anytime soon.”

Hurricane Sally is forecast to weaken to a Category 1 later in the day on Wednesday as it passes across the Florida Panhandle, moving into southern Alabama before noon. The storm is expected to move southeast of Montgomery, Alabama by 11 PM ET.

In the early morning hours of Thursday, Sally is forecast to cross the Georgia line over Columbus and is anticipated to be Southwest of Macon by 11 AM ET.

5 things you need to know to survive a flood

1. Know the flood risk for your area

Research well in advance whether you live in a floodplain. You can find out this information easily by entering your address at the US government web site floodsmart.

2. Get prepared well in advance

Make sure you have at least a 3 day supply of food, water, and any prescription medications required for each member of your family, as well as your pets. Make sure you have a battery-powered weather radio to be able to receive weather updates should the power go out.

Put together an emergency preparedness kit, you can find a government guide here.

Expect that basic services such as electricity, gas, and water could be cut off for days.

Make sure every member of your family has a cell phone. Many companies offer discount family plans, including T-Mobile that currently has a plan offering two iPhones for free, where you can get the Apple I Phone X or other models.

3. Have an evacuation or shelter-in-place plan

If your current location means that your home could be flooded, make plans well in advance to evacuate. If you are on higher ground and may not need to evacuate, make plans for sheltering in place. Keep in mind that many roads may be impassable and you may be forced to “hunker down.” Make sure you have all the supplies you need, knowing that you may be sheltering without electricity, running water or the ability to access a store.

4. Don’t try to drive if roads are flooded

The #1 cause of weather-related deaths in the United States is flash flooding. Follow the basic rule of “turn around, don’t drown.” Flooded roads can be deceptive. If floodwaters rise around your car, and the water is not moving, abandon the car and moved to higher ground. Don’t enter moving water when leaving the car.