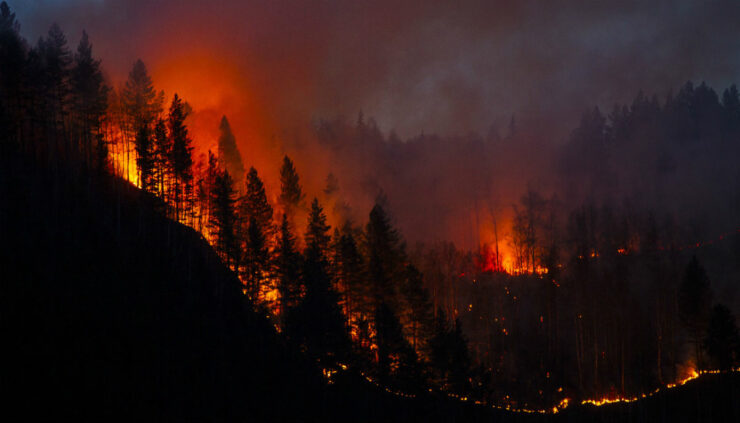 As California continues to battle numerous wildfires across the state, blazes in Northern California have killed three people this week

The Zogg Fire, which began on Sunday, September 27, has also burned hundreds of homes and has forced more than 70,000 people to evacuate the area, according to the Redding Record Searchlight.

Along with the Zogg Fire, the Glass Fire — which is about 140 miles to the south — continues to burn Sonoma and Napa counties. More than 68,000 people in those areas have been forced to evacuate.

Read on to learn more about the fires and how they’re continuing to destroy the state of California.

State of Emergency For California

“Yesterday, I surveyed damage from the Glass Fire and met with some of the folks impacted,” he wrote on Twitter on Tuesday, September 29.

“A State of Emergency has now been declared in Napa, Sonoma, and Shasta. If you’re in the area please stay safe and heed all warnings from your local officials.”

He also asked President Donald Trump to declare a major disaster for the state of California.

The Zogg fire destroyed up to 150 structures by the morning of Tuesday, September 29, as well as burned more than 62 square miles, according to The Weather Channel.

Due to high winds and dry air, the fire has been picking up speed and covering more distance.

There is also a chance the fire could merge with the August Complex, which is currently the largest fire in California history.

The August Complex has burned more than 1,400 square miles and is continuing to destroy homes and other structures in its way.

Down in Wine Country, the Glass Fire has destroyed a number of homes and wineries.

Along with burning more than 66 square miles, it has also taken down more than two dozen homes in Sonoma and 50 in Napa.

According to The Chronicle, many famous wineries have lost buildings, including the Chateau Boswell Winery.

The fire has also reportedly destroyed a farmhouse at Castello di Amorosa, which is a popular tourist destination.

There are currently more than 27 wildfires burning through the state of California at the moment, as thousands of firefighters are working to get them under control.

The strong winds and dry air certainly haven’t helped the firefighters either. The current weather has made it very difficult to contain the blazes and it doesn’t look like it’ll be getting better anytime soon.