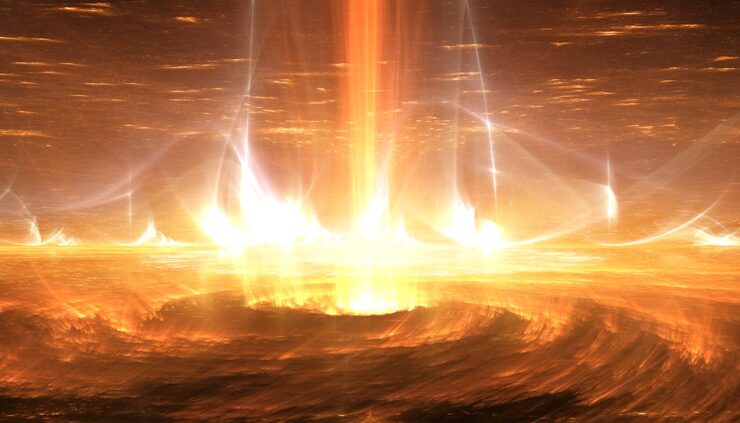 For the first time, researchers detected a 600-mile-wide swirling mass of plasma in Earth’s upper atmosphere over the North Pole, which scientists are calling a “space hurricane” that “rains” electrons instead of water.

Hurricane detected in space for the first time

It seems we not only need to worry about hurricanes on Earth itself but also in space above the planet’s atmosphere after scientists have made a shocking discovery.

Researchers have been studying a phenomenon observed by satellites on August 20, 2014, the results of which have only been uncovered seven years later during retrospective analysis led by scientists from Shandong University in China, Science Alert reported.

The swirling mass of plasma was observed several hundred miles above the North Pole. According to the study, this so-called “space hurricane” above Earth’s upper atmosphere “rained” electrons instead of water, USA Today reported.

Hurricanes detected on other planets, but never in space

In addition to Earth, scientists have previously observed hurricanes occurring in the lower atmospheres of Mars, Jupiter, and Saturn. Enormous solar tornadoes have been observed in the atmosphere of the Sun. However, this discovery of a space hurricane above the Earth is the first time such a phenomenon has been observed in any planet’s upper atmosphere.

The space hurricane located in Earth’s ionosphere was spinning in a counterclockwise direction, the same way hurricanes occurring in the northern hemisphere spin. Researchers said that the hurricane had multiple spiral arms and continued for nearly 8 hours before gradually breaking down.

“Until now, it was uncertain that space plasma hurricanes even existed, so to prove this with such a striking observation is incredible,” said Professor Mike Lockwood, co-author of the study, a space scientist at the University of Reading in a statement. “Tropical storms are associated with huge amounts of energy, and these space hurricanes must be created by unusually large and rapid transfer of solar wind energy and charged particles into the Earth’s upper atmosphere.”

May be more common than we know

“Plasma and magnetic fields in the atmosphere of planets exist throughout the universe, so the findings suggest space hurricanes should be a widespread phenomenon,” Lockwood continued.

Professor Lockwood told USA TODAY that the phenomenon would be visible to the naked eye, “but because the event is over the pole you would have to be at very high latitudes [to observe it].”

What dangers do space hurricanes pose to us?

After observing the phenomena, scientists say that it highlights the importance of improving our monitoring of space weather, which can disrupt GPS systems that handle numerous vital functions on Earth. The authors of the study said more research is needed as geomagnetic activity can disrupt GPS satellites.

Disruptions on Earth can also cause a loss of critical data. If you haven’t done so yet, it’s an excellent time to research cloud data security programs. There are numerous services now, and prices are dropping, with some providers even offering storage of unlimited data and external drives, which means you can backup all your hard drives as well as your mobile device and tablet.