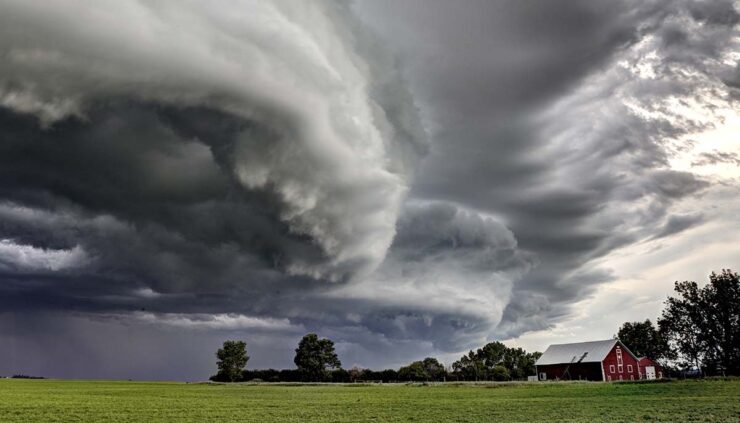 A tropical storm warning is in place for the Gulf Coast from Louisiana to the Florida Panhandle, extreme heat in the West, a wet weekend for the East, and a severe weather threat for the upper Midwest and Ohio Valley tonight.

This weekend, expect lots of wet weather for the eastern half of the US, thunderstorms over parts of the Southwest, and hot and dry in the West, the Daily Voice reports.

From the central US to the East Coast, thunderstorms are forecast over the entirety of the region, heavy in some areas

Portions of southeastern Arizona could see thunderstorms, which would benefit firefighting efforts. Thunderstorms are also forecast for portions of Eastern New Mexico and eastern Colorado.

From the central US Westward, more hot dry weather, extending into the Northwest northern Rockies.

A disturbance in the Gulf of Mexico is expected to strengthen into Tropical Storm Claudette when the system makes landfall in Louisiana on Saturday.

The National Weather Service (NWS) has issued a tropical storm warning that extends along the Gulf Coast from Louisiana to the Florida Panhandle, as well as issued flood warnings for surrounding areas (see NWS weather alerts below).

The latest forecast track by the National Oceanic and Atmospheric Administration (NOAA) projects the storm making landfall in Louisiana sometime after 1 AM on Saturday. The projected track shows the storm still it tropical strength as it crosses into Mississippi around 1 PM on Saturday. By 1 AM on Sunday, the storm will have downgraded to a tropical depression as it moves over Alabama. The storm could still be at tropical depression strength as it reaches the border of northern Georgia near the intersection with Alabama in Tennessee around 1 PM on Sunday.

If you live in the southern US, the incoming tropical storm will impact you. Make sure to have your cellphones fully charged at all times and it would be a good idea to pick up a battery backup unit to keep your phone charged should the power go out.

Supplies are already short – so don’t be unprepared. At a bare minimum, you should have a 3-day supply of food and water for each family member and pet. The same goes for medicines. It’s imperative to have a weather radio, preferably one that runs on batteries and can be powered with a hand-crank. Also make sure to have a flashlight, backup batteries, and backup battery chargers for your cellphones.

The best source of information you can research online can be found at the NHC/NOAA preparedness website. Visit the hurricane preparedness page of the National Hurricane Center and get information on everything you need to know to be ready.

Severe weather threat for the upper Midwest and Ohio Valley, parts of mid-Atlantic

The threat of severe weather will extend from the upper Midwest, through The Ohio Valley and into parts of the mid-Atlantic on Friday, bring the risk of flooding rain, damaging wind gusts, large-scale and potential tornadoes, Fox reports. There is an enhanced risk for Eastern Illinois, central Indiana, and most of Ohio. There is a slight risk for southern Wisconsin, northern Missouri, central and northern Illinois, Indiana, Ohio, southern Michigan, northern Kentucky, northwestern West Virginia, western Pennsylvania, and southwestern New York.

From the central US to the western coast, from the Southwest to the northwest, and the northern Rockies – hot is the word. More triple-digit temperatures are in the forecast as the wave of extreme heat continues through the weekend and into early next week, Fox reports.

The National Weather Service (NWS) has issued the following weather alerts for Friday: