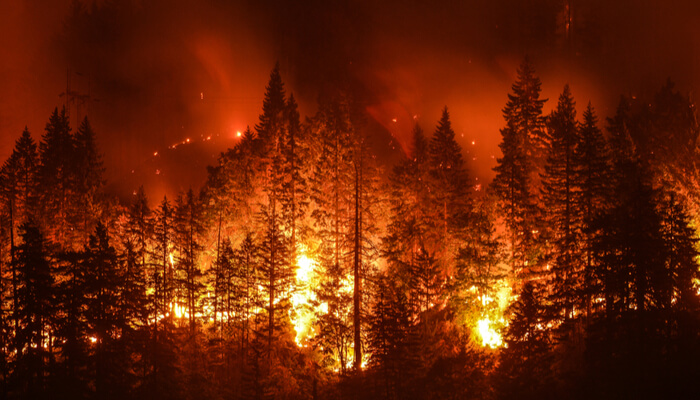 Four large areas of potential flooding are looming for Friday across the U.S., and will move east, over a broad area of the Northeast on Saturday; the National Wildfire Alert Level has been raised to the highest in a decade.

From Friday into Sunday, thunderstorms will blanket most of the nation, with the heaviest cells progressing eastward over the weekend.

The National Weather Service (NWS) was warning of potential flooding on Friday on three fronts.

The first is in the Southwest, over portions of southern and southeastern Arizona into eastern New Mexico.

The fourth front is over portions of the Northwest over the eastern half of Montana and southeastern Idaho.

On Saturday, heavy rain moves east, bringing a flooding threat over much of the Northeast: Pennsylvania, parts of Maryland, Delaware, and Washington, D.C.; New Jersey, Connecticut, Rhode Island, Massachusetts, most of New York, central and southern Vermont and New Hampshire, and southwestern Maine.

The National Weather Service (NWS) has issued the following flood alerts for Friday:

The five levels of the National Fired Preparedness Alert Level look at two major criteria: Large wildfire activity and national resource commitment. On Friday, the alert level was raised to its highest, a Level V, which deems large wildfire activity as “major” and national resource commitment as “very high.” This is the earliest in a fire season that the level has been raised this high. The level reaches its highest when multiple fires are burning with low containment with the capacity to deplete America’s firefighting resources, CNN reported.

More evacuations as large as fire in U.S. only 7% contained

Multiple dozens of wildfires are burning across the U.S., mainly in the West. The largest fire in the nation is The Bootleg Fire, which began on July 6 and burned over 200,000 acres in southern Oregon. As of early Friday, more evacuations were taking place as the fire remains only 7% contained, CNN reported.

Additionally, the fire has impacted lines used to import electricity to California, officials said. As of 7:31 AM on Friday, 4,499 residents were without power in the state, according to poweroutage.us.

Are you prepared for a major emergency?

Summer across the U.S. brings multiple threats: Severe weather, hurricanes, flooding, tornadoes, earthquakes, and wildfires. You need to be prepared to evacuate in any one of these situations.

There are four key items you should have available at all times:

1. A cell phone. This is your lifeline. Ensure you have a phone plan that gives you comprehensive coverage, especially if you live in a rural area. You don’t want to find yourself unable to get a signal in the middle of an emergency. Now’s a good time to search for cell phone plan deals near me before disaster strikes.

2. A weather radio. In a disaster, the electricity is likely to go out, and you need to know what’s happening. A battery-powered or hand-crank and solar weather radio will keep you updated on conditions occurring in your area.

3. A three-day supply of food and water for each member of your family and pets. You’ll need one gallon per person per day.

4. Medicine and first-aid kit. Make sure you have at least a three-day supply (or more) of necessary medicines for persons and pets. A first aid kit is also vital, as a disaster could make it difficult to get medical help.

For more information, check out these resources: