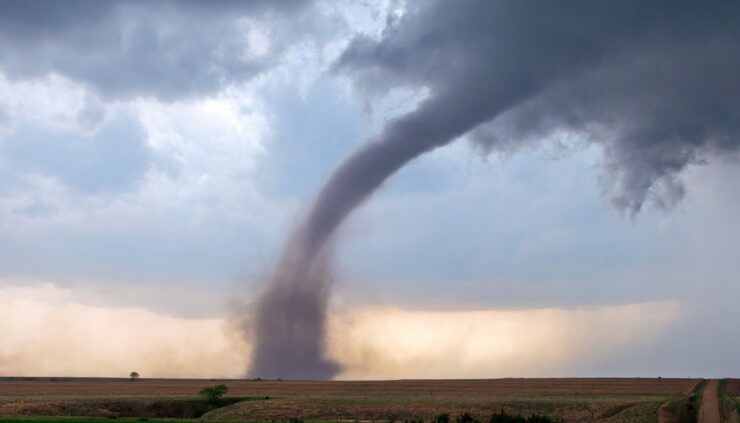 At least 17 tornadoes struck in seven states over the weekend, no deaths were reported due in part to the coronavirus lockdown, but numerous people were injured, and severe weather will continue for the next two days – here are today’s hotspots predicted by the National Weather Service.

17 tornadoes strike in 7 states over the weekend

Over the weekend, at least 17 tornadoes struck seven states: 8 in Iowa, 4 in Illinois, 3 in Arkansas, 2 in Indiana, 1 in Missouri, 1 in Wisconsin, and 1 in Kentucky.

At least 22 people were injured, with two hospitalized in Jonesboro Arkansas, where an EF-3 tornado brought winds of 140 miles per hour and stayed on the ground floor 10-20 miles, It eventually completely destroyed 55 homes along with the Mall at Turtle Creek. The NWS also reported an EF-1 tornado touched down in southeast Greene County.

Tornadoes ripped through to communities in Newburgh, Indiana on Saturday. On Sunday, a possible EF-1 move through Henderson County, Kentucky with winds of 90 mph.

The National Weather Service is forecasting rain and thunderstorms for the central US extending from the Dakotas, south Texas, and east to the Carolinas. Severe thunderstorms are predicted for portions of southwest Kansas and western Oklahoma, as well as southeast Texas, northern Louisiana, and west-central Mississippi.

The NWS also has issued a warning over heavy rain and potential flash flooding for eastern Texas, southeastern Oklahoma, central and southern Arkansas, northern Louisiana, and west-central and north-central Mississippi.

The National Weather Service (NWS) has confirmed that Jonesboro, Arkansas was struck by an EF-three tornado in which at least 22 people were injured.

The tornado struck what, under normal conditions, would have been a busy mall, but it was closed due to coronavirus and undoubtedly was a factor in saving lives. The governor of Arkansas has declared a state disaster.

On Sunday, the Trump administration announced that it is extending nationwide social distancing guidelines for another 30 days, until April 30.

The Centers for Disease Control and Prevention issued a travel advisory to the states of New York, New Jersey, and Connecticut on Saturday coming urging all residents of the three states to “refrain from nonessential domestic travel for 14 days of effective immediately.”

Medical experts working as part of the US government task force on coronavirus now believe the United States could see anywhere from 100,000-200,000 deaths based on new projection models.

These models see as many as 1 million Americans infected with COVID-19, as announced by Dr. Anthony Fauci, the nation’s top infectious disease expert.

College under fire for resuming classes

Under the new guidelines more education is certain to move to the Internet, so getting, say an online criminal justice degree and other certifications are going to be more of the norm rather than the exception.

However, one educational organization is under fire today for bringing back its students despite the expanded social distancing order by the US government.

Liberty University, whose president is Jerry Falwell Jr., is being criticized for its plan to start up classes following spring break on its campus next week, despite reports that one student previously tested positive for coronavirus.

Falwell is contesting the reports saying there were no students at the University that tested positive for COVID-19.