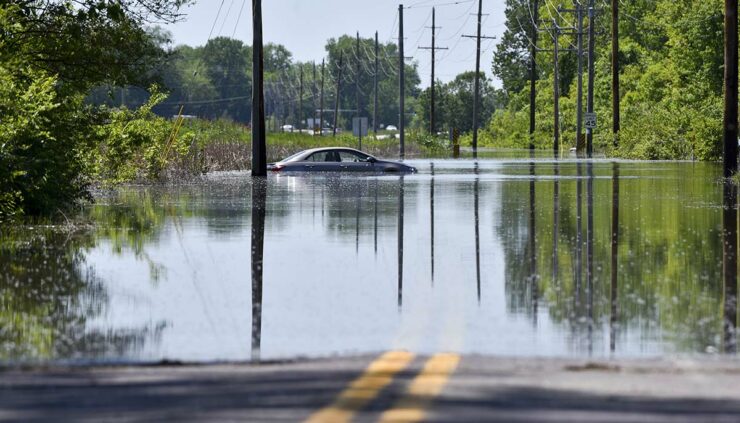 The death toll continues to rise in North Carolina, after heavy rainfall caused flooding that inundated homes and businesses, and washed out roads and bridges around the state.

So far, at least seven deaths have been blamed on the weather. Two more people are still missing after floodwaters submerged a campground.

The torrential rainfall has finally subsided in North Carolina. However, the National Weather Service in Raleigh warned that flooding still remains a threat. Rivers, including the Haw, Neuse, Tar, and Cape Fear, continue to rise.

Flood warnings were still in effect Friday morning for more than 30 counties across the state, including Wake County where Raleigh is located.

Down in Mecklenburg County, Charlotte-Mecklenburg Emergency Management issued voluntary evacuation orders for an area on the Catawba River. A shelter for displaced residents was set up at Hopewell High School off of Beatties Ford Road in Huntersville.

Three people were confirmed dead Thursday at the Hiddenite Family Campground, which sits about 60 miles north of Charlotte. More than 30 other people were rescued, with at least three taken to the hospital. Waters near the campground rose as the area experienced major flooding with about 7 to 10 inches of rain overnight.

Two more, one adult and one child, are still missing from the Alexander County campsite located along the Yadkin River. Rescue efforts continue to search for them.

A fourth death occurred in Alexander County, after a car ran off the road into floodwaters.

At least three more people across the state were killed in weather-related incidents.

Two people died in a crash outside of Statesville. The Highway Patrol told the Charlotte Observer that a pickup was going too fast “for the wet conditions of the roadway and hydroplaned.”

In Wake County, an 11-year-old child drowned after going missing near a creek about 16 miles northeast of Raleigh.

Tropical Storm Eta fueled the torrential rainfall in NC, where the state saw upwards of 9 or more inches of rain in some areas. The moisture from Eta moved north as a cold front moved through the Eastern United States — and that collision resulted in a widespread area of rainfall that drowned Virginia and North Carolina, especially on Thursday.

Statewide, North Carolina is still seeing plenty of damage from flooding. As of Friday morning, the North Carolina Department of Transportation listed nearly 400 road closures and other incidents associated with the rain.