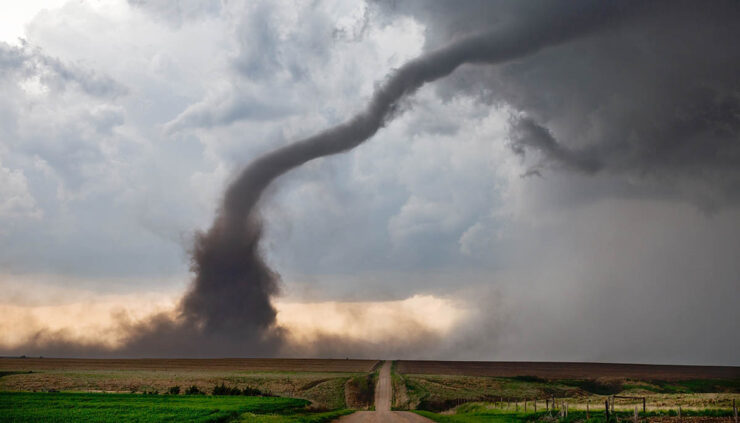 Tornado Alley May Be Shifting to the East, Experts Say

Tornado alley is an area of the central United States were tornadoes occur most frequently. A recent analysis of a 40-year study finds increasing activity that suggests the risky area may be shifting to the east.

What Is tornado Alley?

Tornado Alley: The name alone doesn’t sound like good news and provokes fear. It describes a loosely defined area in the central United States were tornadoes occur most frequently. Tornado Alley spans from central and northern Texas northward to central and eastern South Dakota, bulging west to include eastern Colorado and southeastern Wyoming, and stretching west to include western and central Oklahoma, central and western Kansas, all of Nebraska, most of Iowa and the southern edge of Wisconsin.

Where Are Tornadoes Most Active in the US?

In the continental United States, there are an average of 1,253 tornadoes per year, according to the National Oceanic and Atmospheric Administration (NOAA), national centers for environmental information. While Tornado Alley has traditionally seen the most tornadic activity, the numbers east of the area appear to be climbing.

Indeed, four of the top 5 states with the most average tornadoes per year sit in tornado alley including: Texas 155, Kansas 96, Oklahoma 62 and Nebraska 57. Florida is third with 66, while Illinois is the sixth-most active state for tornadoes with 54 per year and sits just east of Tornado Alley. Colorado ranks seventh with 53 per year and Iowa ranks eighth with 51.

A new study, led by Dr. Victor Gensini, a professor of meteorology at Northern Illinois University, published in the journal Nature, examined data accumulated from other studies over the last 40 years, ABC reported.

The study found that the number of tornadoes in the area traditionally defined as tornado alley have been decreasing, while increases have been occurring to the east.

“The counts there have been going down in the last 40 years, and there have been increases in the Mississippi Valley, Mid-South and southeastern United States – and even in portions of the Midwest,” the study authors wrote. “It’s just fascinating to look at these trends and see over the last 40 years, our areas here in the Midwest have become more at risk than they were in the late 1970s.”

Dr. Gensini warns that thinking too much about tornado alley being the area of most concern creates a false sense of security.

“I think we’re doing a disservice sometimes when we say things like ‘Tornado Alley’ and ‘Dixie Alley’,” Dr. Gensini says. “Because the truth is – tornadoes can happen in all 50 states, including Alaska and Hawaii, at any time of year.”

Are You Prepared for Tornadoes?

Tornadoes and weather brings a variety of dangers both indoors and outdoors. If you live in an area with frequent threats of severe weather, it’s important to have a plan. Your first plan should be to have cell phones for every member of your family so you can communicate in an emergency or if you become separated. Do a search for the cheapest phone plans. There are family plans that will provide a free cell phone for every member of your family. Then, make sure to keep your phone fully charged at all times during days were severe weather is anticipated and/or forecast.

The next important plan is an evacuation plan to know where to go to be safe during a weather emergency.

Next, make sure you own a weather radio, either battery-powered or hand-crank, in order to be able to receive weather updates and warning should the power go out.

You also need a three day supply of water and food for every member of your family and your pets.