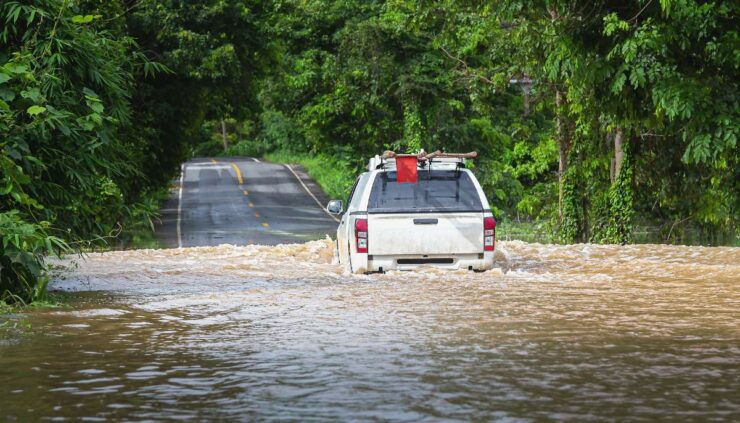 Hurricane Sally dumped ‘4 months of rain in four hours’ in Florida and Alabama on Wednesday, weakening to a tropical depression but still threatening torrential rain and flooding over at least the next 2 days.

Hurricane Sally has downgraded to a tropical storm but the threat of torrential flooding is far from over. Despite a decrease in strength, heavy rainfall from the hovering storm means that flooding remains a major potential hazard.

On Thursday, Tropical Storm Sally will move through the states of Alabama and Georgia. From there, the storm is expected to move into South Carolina in the evening in overnight hours, and then into North Carolina and Virginia.

Forecasters warn that portions of southeastern Alabama and central Georgia could see anywhere from 4 to 12 inches of rain, as well as significant flash flooding. As the storm moves into South Carolina, areas there are expected to seep between 4 to 10 inches of rain.

Isolated areas, from western to central North Carolina, as well as southeastern Virginia, may see up to 8 inches of rain.

NWS flood alerts for the southeast

The National Weather Service (NWS) issued a number of flood-related alerts for the Southeastern US on Thursday.

The slow-moving hurricane made landfall at the Alabama-Florida panhandle border, near Gulf Shores, Alabama on Wednesday and hovered, flooding the area with torrential amounts of rain. Pensacola saw over 30 inches of rain, CNN reported. Parts of Florida saw “four months of rain and four hours,” officials said.

On Wednesday, crews near the Florida-Alabama border rescued at least 377 people. At least one person died in Alabama.

Floodwaters from the storm swallowed up homes, downed trees, and power lines, and turned streets into rivers.

Florida Gov. Ron DeSantis said “pretty much any body of water in northwest Florida” has the potential to see levels rise over the next few days because of heavy rainfall delivered by Tropical Storm  Sally.

Over half a million without power

As of early Thursday morning, according to poweroutage.us, over half a million in the Southeast were without power, including:

The numbers are expected to rise in parts of Alabama and Georgia throughout the day as the storm moves through the area, and later into South Carolina, North Carolina and Virginia.

Don’t lose your data to power outages or flood damage

If you’re working from home, don’t risk losing your crucial data to power outages or floodwaters. With impending threats, now’s the time to look into cloud data security programs to backup your vital digital information.

It will only take minutes to set up an account and backup system and begin protecting your information in the cloud immediately.