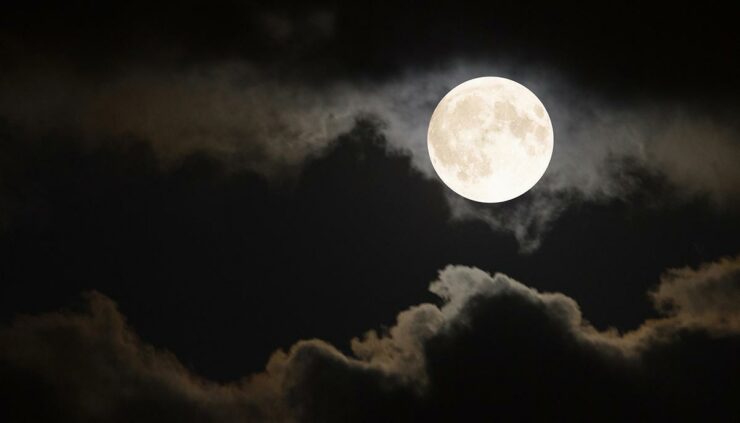 Break out the candy buckets! Halloween night is fast approaching, and this year the spooky night will be a little bit spookier.

That’s because this year, we’ll get a somewhat rare occurrence illuminating the sky.

Ready to get spooky?!

A Blue Moon Will Appear in the Halloween Night Sky

The sky on Halloween night will be lit up by a blue moon, the second full moon of the month.

Sure, every month has a full moon. But, having two full moons in the same calendar month is a relatively rare occurrence. It only happens once every two and a half years on average, according to NASA’s National Space Science Data Center.

It is because the lunar cycle and the calendar year are not perfectly synched. And because of that, about every three years, we see two full moons wind up in the same calendar month.

If you have ever wondered where the saying “once in a blue moon” came from, there you have it. It was coined to mean something so rare you’d be lucky to see it.

Well, this year, we will be lucky enough to see two full moons during spooky season! If anything unusual happens to you on Halloween, perhaps there is a good reason why.

October’s first full moon, also known as the harvest moon, appeared on the first day of the month.

The second full moon appearing in the month of October, the blue moon, will be visible on October 31: Halloween night.

This will be the first instance of a blue moon in the Americas since March of 2018.

First Full Moon on Halloween in a Long Time

On top of that, it will be the first time Halloween has seen a full moon for all time zones since 1944, according to the Farmers’ Almanac.

There was a Halloween full moon in 2001, but only appeared for the Central and Pacific time zones. This time, we’ll all get to see it.

Despite the name, a blue moon won’t likely look blue to us. While the dark blue tone of an evening sky can affect the coloring we see, it will likely appear yellow as usual.

That doesn’t mean that the moon has never appeared to have a blue hue.

“Once in a blue moon,” Earth’s satellite does appear kind of bluish to our eyes. It happens because of smoke or dust particles in the atmosphere, like following a major volcanic eruption.