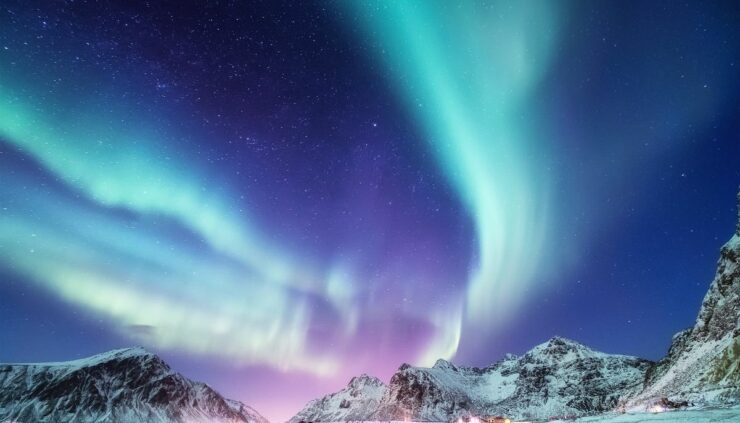 Northern Lights Could Be Visible Over US This Week

On Monday, a solar storm erupted a long duration solar flare which could result in a geomagnetic storm sending charged particles to earth, making the northern lights visible in the northern US and farther south this week.

Northern lights could be visible over US this week

The US may be treated to a colorful light show in the northern skies this week. A solar flare ejected highly charged coronal matter on Monday, sending it across the solar system toward Earth. The flare is also called a CME, or Coronal Mass Ejection.

Astronomers say that, after several months of hiatus, the sun has awoken and has commenced a new period of solar activity, getting busy since November. The sun hurled plasma and magnetic field toward Earth, CNN reported.

The National Oceanic and Atmospheric Administration (NOAA) Geomagnetic Storm Index predicted a Kp Index of 7 (out of 9) for the flare, which corresponds to aurora activity as far south as Chicago, Detroit, Boston, and Seattle.

What this means for us earthlings is that the northern lights will most likely be visible in the northern US this week, and potentially across the middle of the nation, particularly on Wednesday and Thursday evenings.

Visibility is likely as far south as Indianapolis. Most of the Northeast, upper Midwest, northern areas of the Ohio Valley, Dakotas, Iowa, Wyoming, Montana, central and northern Idaho, and Washington state should have visibility on Wednesday and Thursday evening.

Southern US latitudes could see northern lights as well

Forecasters say that, due to the strength of the geomagnetic storm, it’s possible that the northern lights can possibly be seen in the middle regions of the US. Visibility may be possible in the West, as far south as Sacramento and Albuquerque, in the central US as far south as along the Texas Oklahoma border, and to the southeast, even in Atlanta on Wednesday Thursday evening.

High-frequency radio communications could be blacked out

The massive solar flare that occurred on Monday, December 7 has prompted the Space Weather Prediction Center (SWPC) to forecast a Kp Index of 7 (out of 9) geomagnetic storm, Just In Weather reported. Technically, it was a long duration C7.41 solar flare.

The SWPC issued a “geomagnetic storm watch.” This is considered to be a strong event.

A geomagnetic storm of this magnitude can result in a “Wide area blackout of HF radio communication, loss of radio contact for about an hour on sunlit side of Earth,” according to the SWPC, WSLS 10 reported. The flare can also create communication disruptions with radio stations, GPS positioning, and even the power grid.

With these potential electronic and electrical disruptions, it’s a reminder to think about cloud data security programs to make sure your vital data is protected and backed up, especially if you are currently working from home where you have to be your own IT manager.