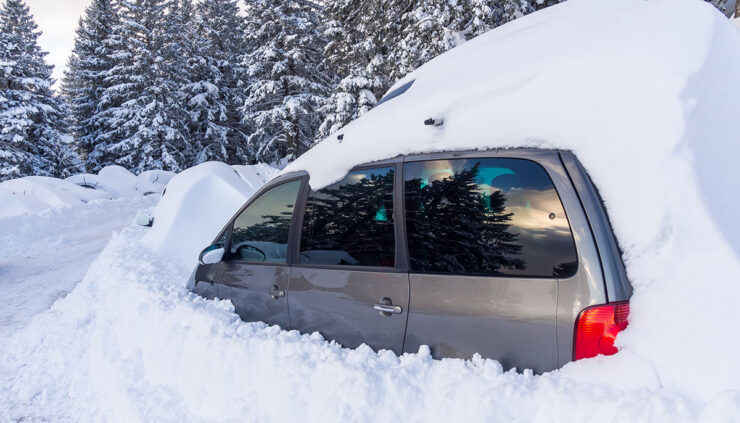 This week’s storms brought a number of disaster stories, from a man buried in his car in over four feet of snow to a playing child swamped by a snowplow, 1000 cars trapped on an expressway, and two tornadoes in Tampa.

A number of drivers in New York State made 911 calls after spotting a vehicle running off the road. Initially, authorities were not able to spot the vehicle. Zone Sergeant Jason Cawley of Troop C of the New York State police was driving to a section of State Route 17C in the town of Owego. He also could not find the driver.

Later while patrolling, he saw what appeared to be a row of mailboxes and waded through the snow to check the addresses. As he dug out snow to see the mailboxes, his hand struck the windshield of a car. Inside, he found the man who had been making 911 calls. The driver was an elderly man who had been trapped for 10 hours. The belt that operated the vehicle’s heater was broken, and the man was suffering from hypothermia and frostbite.

The rescued driver was transported to Lourdes Hospital for treatment. According to police, the trapped man had been plowed in by a truck, WBNG reported. Sergeant Cawley is credited with saving the man’s life.

This story is another example of why your cell phone is your lifeline. If you think you can’t afford a cell phone – think again. Prices have come way down in recent years. So whether you don’t have a cell phone at all or you want to save money over your current cell phone plan, it’s a good time to search for “cell phone plan deals near me.”

Child out playing in the snow gets buried by a snowplow

A twelve-year-old girl playing out in the snow in New York State was buried in a snow bank in what is now being called a “horrible accident.” A family member was using a snowplow to clear the driveway accidentally swamped the child in snow, who was playing there at the time.

When the girl turned up missing, the family members searched and found her buried in a snow bank. They began doing CPR. Albany County Sheriff Craig Apple tweeted that the girl was transported to the hospital for further treatment and is now doing well, bigfrog104 reports.

Two tornadoes touch down in Tampa in December

The National Weather Service (NWS) confirmed that two tornadoes touched down in the Tampa Bay area following Wednesday evening’s storms, WFLA reported. The NWS confirmed that an EF-2 tornado with peak winds of 125 mph touched down at 3:49 p.m. near Seminole and lifted at 4:11 p.m. During its 20 minutes on the ground, the tornado traveled a path of 13.1 miles.

2,010 vehicles stranded in the snow on expressway

As many as 2,010 vehicles were stranded on an expressway north of Tokyo beginning Wednesday night, with the number increasing on Thursday. The line of cars stretched up to 16.5 kilometers at one point on Thursday, according to the police and highway operators. The snow continued to fall so heavy that those coming behind could not escape. Many people were forced to stay in their vehicles overnight.

On Friday, at the time of this writing, about 670 vehicles remain stranded, Japan Today reports. Numerous snowplows were deployed at hard-hit sections of the Kanetsu Expressway, which connects Tokyo and Niigata Prefecture on the Sea of Japan coast. Members of the Ground Self-Defense Force were deployed for disaster relief efforts in the affected areas.