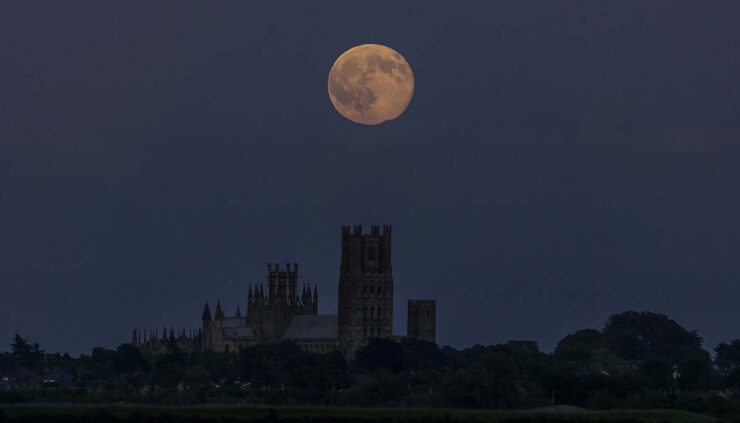 The last Supermoon of 2021 will occur on Thursday, June 24, dubbed the “Strawberry Moon,” while Northwest is set for a dangerous, record-breaking heatwave of historic proportions, and a severe weather threat for Midwest.

The full moon reaches its peak on Thursday, June 24 at 2:40 PM EDT, which won’t be visible until later in the evening when it drifts above the horizon. It marks the last full moon of spring or first of summer, as well as will be the last Supermoon of 2021, CBS reports.

How the strawberry moon got its name a

The strawberry moon derives its name from several Native American tribes. The name comes not from the moon’s color, but that its full appearance marks the ripening of “June-bearing” strawberries, according to The Old Farmer’s Almanac. In Europe, the “Honey Moon” was commonly used, and may be tied to the popularity of June weddings, hence, the term “honeymoon” is the “sweetest” moon of the year. The month of June is named after the Roman goddess of marriage, Juno.

The National Weather Service (NWS) is warning that the Pacific Northwest will experience an historic heat wave beginning this weekend and continuing into early next week. The triple-digit temperatures are anticipated to climb 30 degrees or more above average, toppling all-time records, the Washington Post reported.

“Record-Breaking and Dangerous Heatwave coming to the West,” the NWS tweeted. “Over 80 sites are forecast to break daily high temperature records starting this weekend.”

The West has been hammered with historic levels of heat for the month of June, with at least 75 years of records shattered during the week of June 13-19, according to the NOAA, the Weather Channel reported. In addition, Palm Springs, California, and Salt Lake City, Utah, tied all-time record highs for any date of the year.

The West is suffering from hot, dry weather and drought conditions. Such an environment can age your skin. Check out the best anti-aging serums.

For Wednesday, the NWS issued a number of alerts across the US Wednesday for heat and fire danger.

Excessive heat warning: northern California, all of Oregon and Washington, and northern Idaho.

The NWS is warning of potentially severe thunderstorms over central and eastern Nebraska on Wednesday.

The NWS is forecasting a larger severe weather outbreak on Thursday that will include portions of Kansas, Nebraska, Missouri, Illinois, Iowa, Minnesota, and Wisconsin. The thunderstorms will also bring the potential of flooding rain to parts of Michigan, Iowa, Illinois, and Wisconsin.